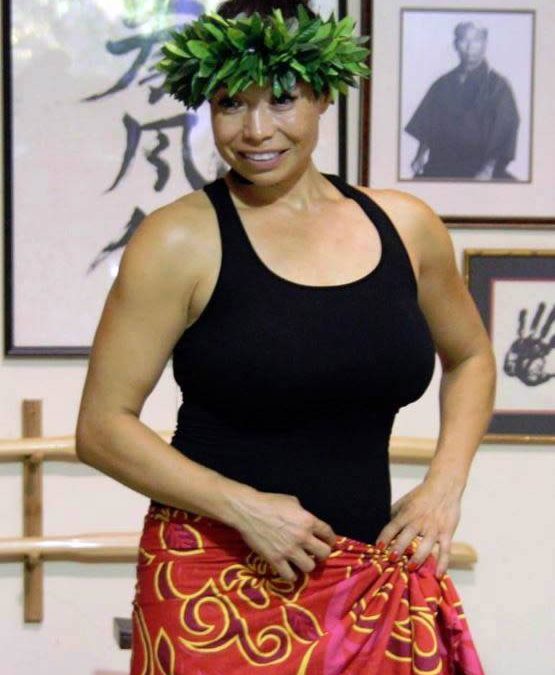 Kumu Michelle Manu, began studying martial arts at the age of 9. She is a first generation Senior Black Belt under Olohe Solomon Kaihewalu, and the only woman instructor. She has been a competitive athlete, professional Polynesian dancer, and a model. Michelle is a relentless advocate, instructor, and author of women’s self-awareness and defense. She was a director for America in Defense (AID) where she led and taught pilots and flight attendants air cabin crew safety (close-quarter combat) as a result of September 11, 2001. She also instructs self-defense for a local Southern California college and community programs through her Super Hero Experience (S.H.E.) Program.

Michelle is known and respected for her martial arts skills and work as a TV host, fight commentator, and a fight actress and narrator for film and TV. She continues to book various modeling, film, television, theatre, print, and radio projects. Michelle has graced the pages of Inside Kung Fu, Sports Illustrated, Martial Arts Masters Magazine, Seni Beladiri (Malaysia), and Tae Kwon Do Times (Korea). She is a Masters Hall of Fame inductee (2006), World Black Belt named her Martial Artist of the Month (2002), and Argentina Martial Arts Hall of Fame (2016). Michelle is a live ringside fight color commentator for Archangel Worldwide MMA, host of the Masters Hall of Fame World News, host/producer of Silk Warrior TV, host of Influential TV, and a contributing author to several literary and documentary works.

Michelle grew up in Southern California and also lived in Chicago for seven years. During her time in Chicago, she toured the Midwest as a professional Polynesian hula dancer. Kumu Michelle choreographs and teaches the kahiko or ‘auana hula. The hula is the soft to the Lua, which is the hard. The kahiko hula was used to conceal the practice, weapons, and techniques of the warrior fighting arts from the missionaries.

She began her runway career as a bridal model at the age of 5. She is a graduate of John Casablancas, John Robert Powers, and Barbizon and was named Orange County Model of The Year in 1986.

Michelle has had a successful twenty year career as a legal and business professional, consultant, mediator, leader, and teacher. She has taught for a private Southern California college and has sat on several college boards as an academic advisory member. She has earned a Certificate in Paralegal Studies, Juris Doctorate, Diploma in Leadership for Senior Executives from Harvard Business School, and an Associate Certificate in Project Management from George Washington University. She is a candidate for an MscD in Metaphyiscal Science and PhD in Philosophy (2020).

Michelle will be offering her women’s awareness and self defense class again this year! Wear comfortable work out clothes and bring a water bottle. You don’t wanna miss it!

Cost:
Cost is $40 plus an additional $5 for a temporary registration if not already an AJJF ( American Judo & Jujitsu Federation ) member.
If you are registered for clinic the class is FREE to you.